A leader in the field of physical rehabilitation and research since our founding in 1900, Helen Hayes Hospital is widely recognized as one of the nation’s premier physical rehabilitation hospitals. We provide innovative, compassionate care to individuals who have experienced disabling injuries, surgeries, or illnesses, enabling them to resume their highest level of independence and achieve active, fulfilling lives.

Our century-long focus on the singular specialty of physical rehabilitation has enabled us to provide the very best the field of rehabilitation medicine has to offer:

Our 155-bed hospital is located in the lower Hudson Valley making Helen Hayes Hospital an ideal location for patients from throughout the New York metro region and beyond. Patients and medical professionals choose us for our reputation for excellence, dedication to compassionate care, and proven success at treating even the most complicated cases. Outcome statistics show that the vast majority of Helen Hayes Hospital patients return home following discharge.

Our experts treat both inpatients and outpatients of all ages with a variety of diagnoses, including:

96% of HHH patients who are discharged home are caring for themselves at home 30 days after discharge.
*As reported by a 30 day post discharge survey

Accredited from the Joint Commission on Accreditation of Healthcare Organizations (JCAHO)

Founded in 1900 by Dr. Newton Shaffer, Helen Hayes Hospital is the nation’s first free-standing, state operated hospital dedicated to the treatment of individuals with physical disabilities. The hospital was initially established in response to a public health epidemic, providing treatment to children suffering from the ravages of tuberculosis. The facility was conceived not only to improve the physical health of the children, but also to offer vocational and educational services that would enable them to lead productive, independent lives.

In the early years, the majority of patients were treated for tuberculosis of the bone and joint. By 1920, polio was the leading cause of hospitalization, accounting for nearly one third of the hospital’s admissions. The years 1944-45 saw the hospital face acute shortages of personnel because of the ongoing war effort, coupled with the worst polio epidemic yet experienced.

The hospital and its staff were severely taxed, and many volunteer organizations and individuals gave considerable assistance during this emergency. At this time, the legal restrictions for the admissions of patients over the age of 21 were lifted and adults were admitted for the first time.

Helen Hayes MacArthur became involved with the hospital in the 1940’s and in 1944 was appointed to the hospital’s Board of Visitors.

By the end of the 1960’s, the prevalent conditions among children admitted to the hospital were congenital abnormalities and cerebral palsy. Major causes for adult admission were stroke, spinal cord injury, amputation, and orthopedic problems.

Through the years, the hospital has grown into a facility that is capable of caring for patients with the most complex and challenging disabilities. It is a member of the NewYork-Presbyterian Healthcare System and has 155 inpatient beds and an active outpatient care service.

Helen Hayes MacArthur and the Hospital: 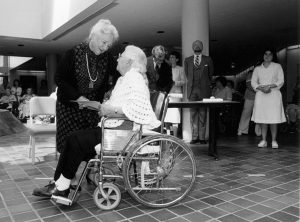 The hospital was renamed in honor of the famous actress of stage and screen Helen Hayes MacArthur in 1974.

Mrs. MacArthur was appointed to the hospital’s Board of Visitors in 1944 by Governor Thomas E. Dewey and served for 49 years until her death in 1993. Mrs. MacArthur was a tireless advocate for the hospital. She successfully led a fight to keep the hospital in West Haverstraw during the 1960s when a proposal was made to move the facility to Albany’s Empire State Plaza.

She was also instrumental during the 1970s in lobbying for funding to transform the hospital into a state-of-the art facility. Her tremendous efforts on behalf of the hospital were rewarded on October 10, 1980 when the new $37.8 million hospital was dedicated.

Mrs. MacArthur contributed her enthusiastic support to hospital events and fund-raising efforts, including faithful attendance at the hospital’s annual Classic Race and the use of her home Pretty Penny for a dinner to launch the hospital’s endowment fund. Known as the First Lady of the American Theater, Helen Hayes MacArthur endowed the hospital with not only her name, but her enduring spirit and legacy of hope.

A Rose By Any Other Name…

Over its 120 year history, the hospital has had several names.